In vitro fertilization is a long and complex procedure, the decision to undergo this procedure is dependent on a number of factors. There are a number of  tests performed before undergoing IVF, which will determine whether or not a woman is eligible for IVF. These IVF tests ensure that problems such as miscarriage, abnormalities in the embryo or any general infection or disease that could affect the health and chances of successful childbirth are ruled out to the highest extent. These IVF tests can be split into several categories:

(1) Ovarian reserve testing : These include a few simple hormone blood tests that can give a doctor an idea of ​​how many eggs are in a woman’s body, the ovarian reserve.A woman who ovulates and get her periods on her own, these tests should be done on the 2nd or 3rd day of her period. Day 1 is considered the 1st day of full flow bleeding (spotting does not count). A woman who does not get periods or gets them infrequently because she don’t ovulate then she can do these tests any time. Three hormones are specifically tested, FSH, AMH and estradiol. AMH is a hormone that is produced from the follicles in the ovary, a higher AMH means better response to fertility medication which results to more eggs retrieved. Usually AMH is higher in young woman but sometimes in case of an ovulation problem called polycystic ovarian syndrome (PCOS) AMH increases. FSH comes from the pituitary gland and its value should be low because high the value of FSH higher will be the chance for not responding to fertility medications.

(2) Tubal Patency test : HyCoSy, also known as Hysterosalpingo Contrast Sonography, this procedure is unique, normal ultrasound or X-ray do not allow to properly see and assess the condition of the uterus and whether the fallopian tubes are blocked or functional. HyCoSy is a specialized ultrasound scan that gives us a clear view of the fallopian tubes. The outcome of this test is to find out whether a woman’s fallopian tubes are operational for IVF or not. 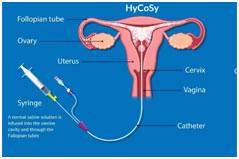 (3) Semen Analysis : A semen sample is provided and sent to a laboratory for testing. Sperm shape, motility and concentration are some of the things tested for. If the semen analysis reveals the male has low sperm count, low sperm movement or a high percentage of abnormal appearing sperm then embryologist use the method called ICSI or intracytoplasmic sperm injection to fertilize the eggs. Other tests to detect male infertility is DNA Fragmentation Test. Sperm being smaller have to tightly packed the large DNA to travel it from a man into a women’s egg. In the process of packing some of the DNA strands will break this is called DNA fragmentation. The American Society for reproductive medicine issued a practice guideline which stated, “DNA damage is more common in infantile men and may contribute to poor reproductive performance” 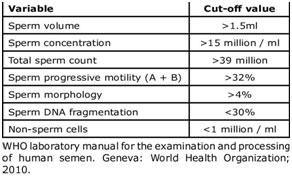 (4) Prolactin test: Prolactin is a key hormone that is essential for the production of breast milk. Too much prolactin in the body can prevent conception. The results of this test can allow a doctor to decide which drug is best for each woman.

(5) Viral Markers Test: Doctors screen a patient (both husband and wife) for HIV, hepatitis B, chlamydia, rubella, and chickenpox. All of these diseases could pose a risk to a growing fetus and cause serious complications.

(6) Vitamin D3 Test: Vitamin D deficiency has been linked to an increased risk of abnormal pregnancy implantation, leading to obstetric complications such as preeclampsia and fetal growth restriction.

(7) Sugar Profile Test: Some of the well known problems from unwanted sugar consumption are diabetes, weight gain, increased heart risk and the lesser known truth is the impact on male and female reproductive hormones. Men with high blood sugar have been found to have higher levels of sperm DNA damage, a factor that can negatively affect the likelihood of conception and increase the likelihood of miscarriage.

These tests are an important part of fertility treatment and will help doctors personalize your treatment and advise you on the treatment most likely to give you a baby.